Sumitomo has developed the new "AC4000K" series, to be launched in May 2017, for improved stability and longer tool life in the turning of gray and ductile cast iron. 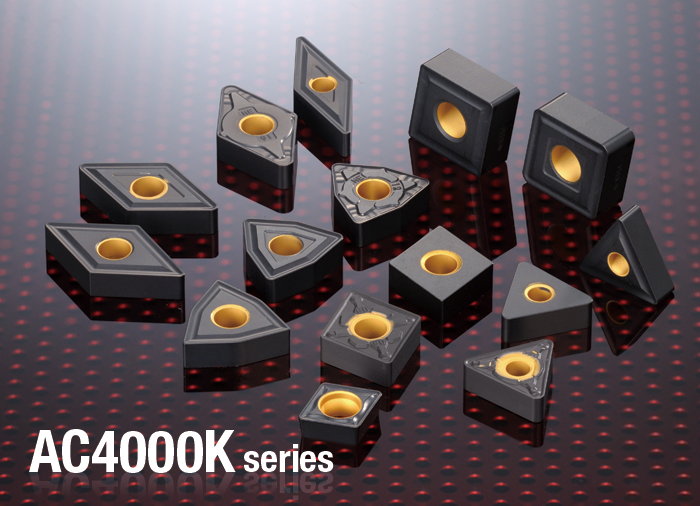 Cast iron can be used to produce complex machine components at relatively low cost, as its strength can be increased by adding additives to change its metal structure. From such features, automotive structural parts with complicated shapes, such as sliding parts*1 found in disc brakes that require lubrication and vibration damping properties or gear casing where strength is required, can be made from cast iron.

Gray cast iron*2 is a highly workable material with low impact strength and high thermal conductivity, generally resulting in a long tool life. However in recent years, with the increased demand for high efficiency machining, suppressing noticeable flank wear under such conditions has become a task for improving tool life. On the other hand, ductile cast iron*3, a material with high tensile strength, also poses a problem to cutting tools as it causes the cutting edge to heat up easily and also easy work adhesion, resulting in inconsistent tool life.

In response to these challenges, Sumitomo has developed the new "AC4000K" series for cast iron turning. Although the retail price is set at the same level as existing products; this new series will contribute greatly to lowering overall production costs by providing more stable tool life, thus reducing tool usage and frequency of tool replacement, and higher efficiency, resulting in shorter machining time.

Set the same as for our existing products

*1Sliding parts:
Parts within a machinery that rub against each other.

*2Gray cast iron:
Cast iron refers to an alloy whose base components are primarily carbon (C) and silicon (Si), where the carbon content is 2.1% or higher. Gray cast iron is a type of cast iron consisting of carbon that is more graphite than cementite, resulting in a gray-colored fracture surface.

*3Ductile cast iron:
A type of cast iron that has slightly higher carbon and silicon contents than gray cast iron; its graphite structure is spheroidized by adding magnesium and cerium.

*4CVD (Chemical Vapor Deposition):
A method for forming a coating layer through vapor deposition, on the surface of the substrate material which has been heated within a reaction chamber. Raw material gases containing components of the target coating are fed into the chamber where they will chemically react and form the coating.